Vain + Alone: The heart broken a thousand times, reassembled a thousand and one. 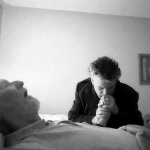 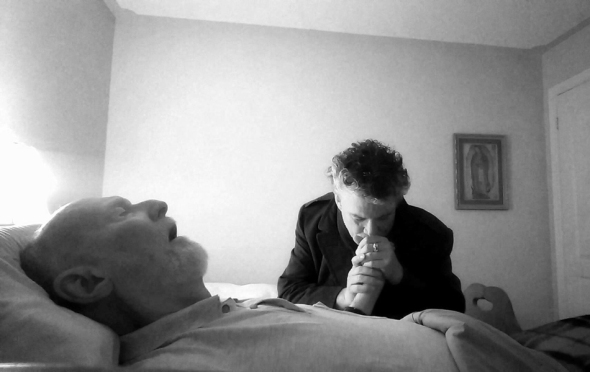 These were days infused with a kind of poetry that crushed us,
days burdened by an unbearable beauty…
that broke the heart a thousand times and reassembled it a thousand and one.
These were days when I was not much of a father to my children,
not much of a lover to my wife, not much of a friend to the few friends I have.
Only a son in service to his father.
In return, he told me with scathing honesty what he saw in me,
and located that nurturing part of me I’d thought long dead.

I’ve held on to this photo for a bit, unsure of it, not trusting its’ origins.
But in the life I have created for myself,
these kind of moments are all I have to weave into the work I do.
So, I wonder aloud here at what this man gave with his dying
to his wife, his children, his grandchildren, and his friends:
shattering the inane noise of the world for us with his ragged breath,
lubricating this arid desert of a place
with tears that leaked from his eyes in his final moments,
and finally binding us together with his absence…

This is the gift he gave us:  how it could be when it is our time to die.

The poetry, the heartache, the laughter, the songs,
the courage, the fear, the healing,
the forgiveness, the goodbye, the wrenching loveliness of it all—
this is what we can give to our own sons and daughters, lovers and friends.

I was alone in the house when I self-consciously set up the phone to capture singing a song to him, a song we had crafted together.  It was a song that came to be when he declared his pride in what I did for a living even though, as a father, it worried him to no end.  He was firm in the pride he felt but asked if I couldn’t at least write something “light”— not my strong suit, to be sure.  So, we spoke of his great love for my mother, and his growing love for the simple beauty he would see outside the window — the trees, the sky, the sun, the birds — that left him speechless and dumbfounded as to why the whole world seemed not to notice.  A song was woven together over time.

On this night, I sang it to him as I had done dozens of times in the previous weeks (along with his favourite cowboy tunes and a few from the hit parade he used to sing to us as kids) but in a self-conscious way, too aware of the camera, wondering what kind of man would film himself like this? as I sang looking down on his unmoving body.

When I stumbled into the bridge,
and the line “Love comes for you”,
he surfaced and opened his eyes to me,
raising his arm slowly to rest his hand on my forearm.
I continued picking through the solo
and at the first line of the last chorus, “Mary, Mary, in the yard”
he chuckled, then slipped back to where he’d come from, gliding out on
“Through the trees the sunlight slips/
To steal a kiss from Mary’s lips.”

This photo, taken after I put the guitar down,
is less a record of my singing to him
and more that of a son who owed his father everything,
learning here how to say goodbye,
and deeper in debt
when all was said and done.

Would that it could be this way for everyone who reads this. 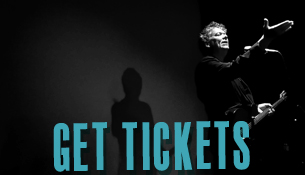 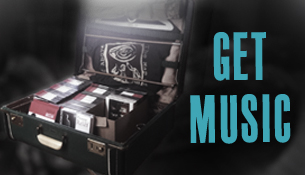 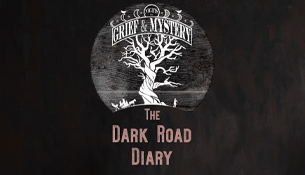